7 Days To Breaking Up With Sugar

Permanently eliminate your sugar cravings in just 7 days by using behavioural psychology to change your relationship with food. 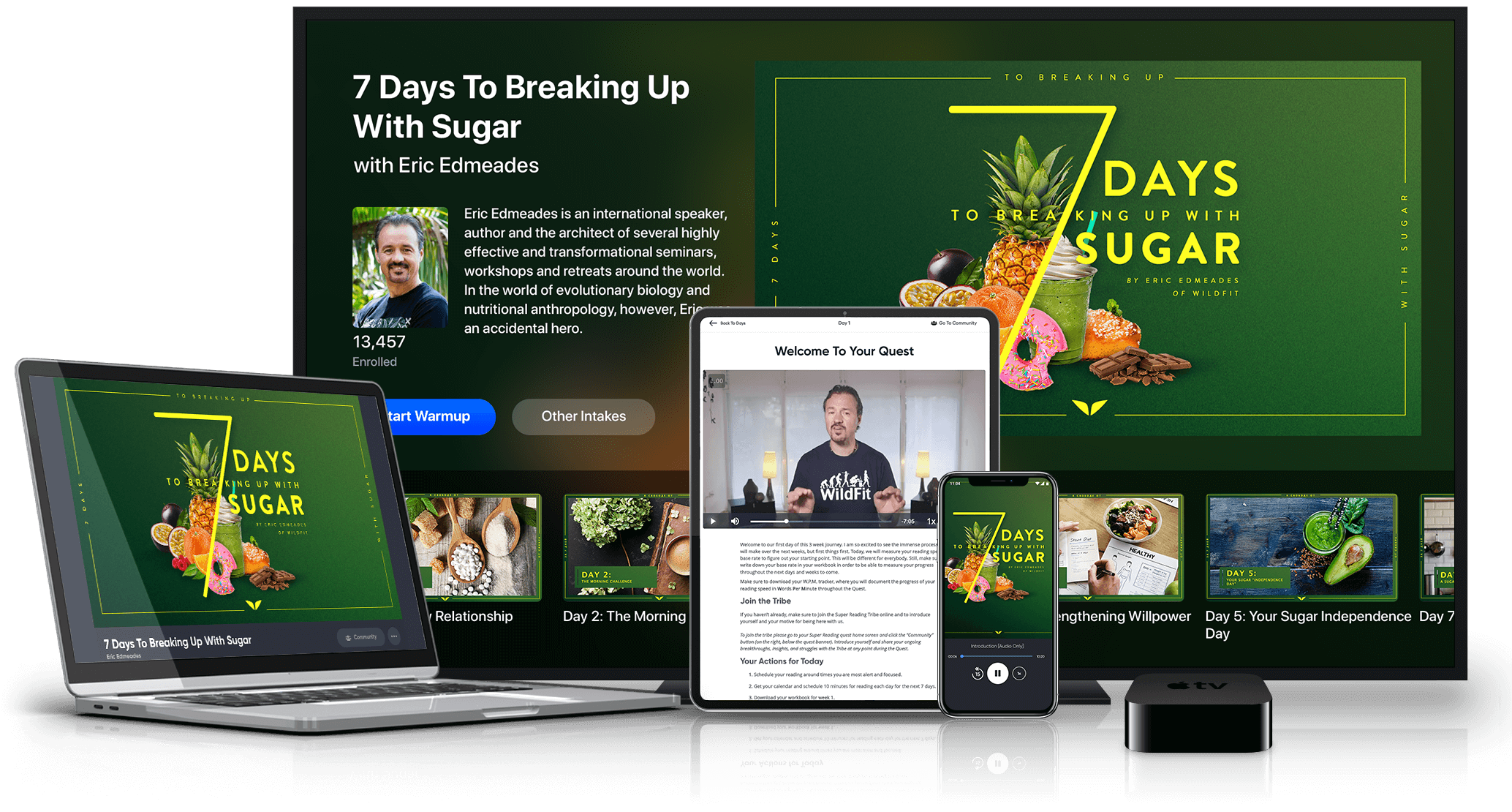 by Eric Edmeades, Author of Wildfit by Mindvalley

We all know that sugar is one of the most harmful substances we can put in our body.

Modern science has shown that not only is sugar more addictive than cocaine, but it also has an unimaginable negative impact on our immune system.

Sugar is everywhere, in the average American grocery store, sugar is in 70% of all products. Food companies put it in there because sugar makes you eat more… it gets you hooked.

This means more money in the wallets of Big Food companies, and a steady worsening of your health, your immunity and your lifestyle.

Sugar is addictive but like all addictive substances, the right methods can break the addiction cycle and diminish your desire for sugar.

You’ll notice by Day 3 of this program, your sensitivity to sugar will increase significantly and you will begin to enjoy food with less sugar.

By Day 7, you will be able to completely detach yourself from this craving and enjoy the dramatic results.

Eric Edmeades is an international speaker, author and the architect of several highly effective and transformational seminars, workshops and retreats around the world.

Prior to these achievements, he was a serial entrepreneur involved in several big businesses including the Lucasfilm spin-off, Kerner Optical and his first successful venture, The ITR Group, a supplier, integrator and maintainer of IT equipment.

In the world of evolutionary biology and nutritional anthropology, however, Eric was an accidental hero.

Suffering for most of his teens and early 20’s with severe allergies, sinus troubles, throat infections and acne, he was only weeks away from a surgery to take out his tonsils when a friend of his urged him to attend a personal transformation seminar. Not only did this seminar clear up 10 years of chronic symptoms but it changed his entire belief system around health and food.

Since then it has been his life’s passion to help people wake up to the reality that, in terms of health, they are not on a path of healthy living and that the cost of this is far too great.

In addition to the Breaking Up With Sugar mini-Quest, Eric is also the creator of WildFitⓇ, the health transformation program by Mindvalley. WildFit has had a profound effect on tens of thousands of people and is considered one of the most effective ways for total radical health transformation.

Eric received a medal from the Canadian Senate, for his work in human health

You will learn how to break your dependency with sugar in just 7 days. The Warm Up episode starts with an overview on the Quest and how ending your relationship with sugar will transform your health & fitness dramatically.

Starting from Day 1, you’ll begin on the path of getting in touch with your eating habits and why you crave eating food even when you’re not really hungry. Each day up to Day 7, you will go deeper and ultimately start living your own sugar-free life.

Creating A New Relationship With Sugar

Why do we get hungry? Discover how your emotions influence your food decisions and learn how to consciously make your own eating decisions.

Eric will be guiding you through the healthier way to incorporate sugar in your diet. Hint: it’s completely natural and you’ll be doing it on an empty stomach.

Experience The Break Up with Sugar

Today’s the day to resign from all products that contain refined sugar and artificial sweeteners. Your awareness of added sugars in food enhances as you thoroughly check the Ingredients Lists. There are so many different names which food labels use to disguise sugar. Find out more in this lesson.

Changing Your Internal Dialogue On Sugar

In this lesson, Eric shares some insights on the internal dialogue you might be having when considering sugary foods, and the experience of living a sugar-free life.

Eric announces your Sugar “Independence Day”. This will be a pivotal moment and first step into a lifetime of elevated health & fitness. Your sensitivity to sugar will be changing dramatically, such that you no longer enjoy sugary products the way you used to whether that be the ability to appreciate darker chocolate or consume black coffee.

A Sugar-Free Life Made Easy

A sugar-free life doesn't have to be hard - if we have the right strategy. Today, you become acutely aware of the tricks your Sugar Devil will use to convince you to cave into your sugary cravings. Once you identify them, you'll search for alternatives and in turn break the eating patterns you once had.

It's the final day of the Quest! By now, you have taken control over your temptations. You feel empowered and determined to not input sugar into your body. Your new, healthier lifestyle has just begun.

What Our Students Say

Enroll In 7 Days To Breaking Up With Sugar For Free

Join WildFit author Eric Edmeades in this free 7-day mini Quest and discover how to get rid of your cravings for good and transform your health.

Enter Your Information To Get This Added To Your Mindvalley Account

Register now to get started